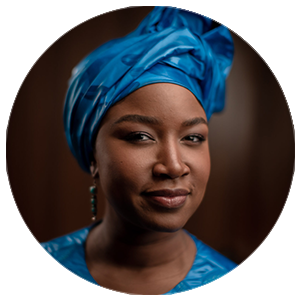 Seynabou DIA SALL, founder and CEO of Global Mind Consulting, a consulting firm specializing in public relations and strategic support, has always been driven by the ambition to promote the actors of the African continent’s transformation and to enhance an African expertise for the world. From Gabon and Senegal, Global Mind Consulting advises economic and institutional players, in Africa and worldwide, supports them in their positioning strategy, the definition of their messages and the enhancement of their image, in order to increase the resonance and impact of their actions. Among Global Mind Consulting’s ecosystem are international organisations, public institutions, companies and startups, foundations and associations, public figures… all driven by the same desire to change the narrative of the African continent.

Diaspora Ambassador of Women in Africa, Seynabou regularly leads capacity building sessions dedicated to young and women entrepreneurs on the continent. Awarded African Woman of the Year in 2017, Seynabou was also awarded at the Diaspora Awards in 2019 and was nominated in the Financial Afrik ranking of the 100 who are transforming Africa in 2019 and 2020. In 2021, Seynabou is listed in the #NaoleMedia40 Ranking, an unprecedented listing of the 40 most inspiring African women in the Communication and Media professions, in French-speaking Africa and its diaspora.

At UNESCO, she was able to integrate the permanent delegation of Senegal where she worked, for three editions, on the organization of the African Cultural Gala. She will accompany the personal branding of political personalities by preparing their public and media interventions at events such as: the Transatlantic Minority Political Leadership Conference.

She will be involved in the organization of the First National Forum on Entrepreneurial Diversity and was responsible for the organisation of information seminars at the European Parliament and a political mission and at the Congressional Black Caucus in Washington DC. For four years, she has assumed the vice-presidency of the European Collective for the Development of African Countries, where she has used its understanding and experience of sustainable development and endogenous to advance structuring educational projects. She advised the « Workshops of the Earth », also known as The Planet workshop and contributed to the creation of their first antenna on the African continent, in Niger.

Today, Seynabou heads the public relations consulting firm, Global Mind consulting, which she created in 2012. From then on she aims to support the communication of companies and organizations present on the African continent.

Global Mind Consulting also focuses on supporting young entrepreneurs and initiatives that promote the empowerment of women in Africa. It is therefore committed to be significantly involved in many efforts that address these issues.

– Design and organization of several communication campaigns for the Company National Social Housing Corporation (SNLS) and the Société Nationale Immobilière (SNI) of Gabon at the national and international levels in order to promote their main real estate programs. Global Mind has invested heavily in the implementation of its strategic and priority projects for the country;

– Development and implementation of positioning strategies for stakeholders in the oil, transport and insurance sectors;

– As an expert consultant in the framework of the activities of the African Union, she has led capacity building sessions for entrepreneurs throughout the country continent such as « Training in entrepreneurship and leadership for youth and women empowerment to build capacity » held in April 2017 in Zanzibar, Tanzania, or the « Youth and women training » organized in December 2017 in Uganda;

– Ambassador of the Women in Africa network, which focuses on promoting the female leadership; and intervenes at the annual meeting in Marrakech. In June 2019, Global Mind encouraged the organization of the first WIA session dedicated to the role and impact of the media in economic development. With high level interventions, the panel bringing together Denise EPOTÉ, General Manager of TV5, among others Monde Afrique and Grace LOUBASSOU, Director of International Relations for the CANAL+ Group, which she moderated by addressing the place of women in the media;

– Jury member and trainer for continental entrepreneurial initiatives, « Grand Prix d’Excellence » and « National Business Plan Competition respectively organized by Junior Achievement and the National Agency for the Promotion of Investments. She has also been an African mentor since 2016 for the Africa Entrepreneurship Awards 2017 and organized the selection phase in Gabon for the Hub Africa 2017. She supervises entrepreneurs and advises many start-ups regularly in structuring their development strategy;

– Speaker at many forums such as: « Africa-Portugal Forum » in Porto in December 2017, « Club Afrique Développement » in Casablanca in March 2017, « Forum de Saint Louis » in December 2017 in Saint Louis (Senegal) and on the occasion of the 25th anniversary of the Institut Supérieur de Management (ISM) in Dakar in December 2016;

– At the African Week organized by Sciences Po Paris, she discussed « Women’s involvement in the entrepreneurship boom in Africa »

– Organisation and facilitation of the « BGFI Bank Group Executive Conference » in Paris in 2016, « BGFI CEO Meeting » in Libreville in June 2017