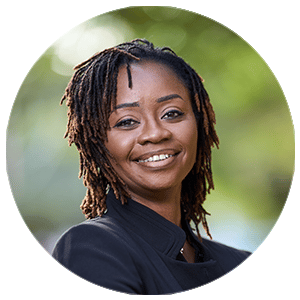 Having always been committed to supporting and transforming territories, Mame Aby Seye turned early on to sociology and demography. With a doctorate in Sociology-Demography, she joined the NGO ENDA Tiers-Monde in Senegal in 2004, an experience that made her able to apprehend and work on issues specific to Senegalese territories. After a few years in France in consulting positions, Mame Aby Seye joined the Senegalese Caisse des Dépôts et de Consignations as Project Manager for two years, then Head of the Territorial Development Division for two more years.

In 2019, Mame Aby Seye was appointed by H.E. President Macky Sall as Executive Director of the Fonds de Financement de la Formation Professionnelle et Technique (3FPT), where she carried the voice of vocational training in Senegal for almost three years and reinforced the country’s leadership at the pan-African level.

In 2022, Mame Aby Seye was appointed by H.E. President Macky Sall as General Delegate for Rapid Entrepreneurship of Women and Youth (DER/FJ), where she accompanies women and youth in entrepreneurship, guided by a constant and sustainable focus on social inclusion and territorial equity.