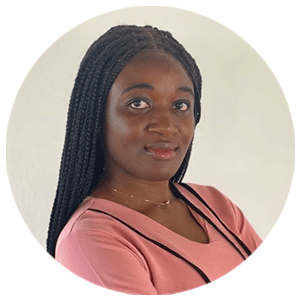 Bih Adelaide is a Clinical Biologist with over 7 years of working experience and the president/ Co-founder of the African Initiative for Health and Research Promotion in Cameroon. Being a victim of the ongoing Anglophone Cameroon armed conflict, she decided to use her medical skills to create a social entrepreneurship venture that provides pro-bono healthcare services to other forcibly displaced victims of the conflict and low-income persons in Yaounde II, Cameroon.

Along with her co-founder who is a Medical Doctor, they run a medical cabinet where they have offered free and subsidized healthcare to close to 1000 conflict-affected persons (internally displaced persons and refugees).

Recently announced winner of the Women in Africa Young Leaders program, she has been Listed as one of 50 African Women in Development by Nigerian based organization- Donors for Africa.  Her work equally called the attention of Ecofin Agency (a Geneva based media house) and Lioness of Africa (a South African media company) on which she featured.